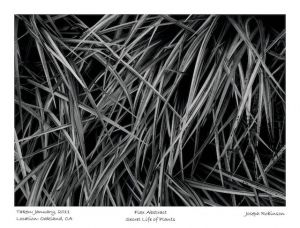 I have been taking photos of flowers and plants for a few years now.  The initial photos were taken kind of randomly.  I tried to shoot whenever I noticed that there was dramatic lighting. Photographing in black and white makes then a little abstract, not quite real life and not quite still life.  When showing them to some friends, they noticed that there were some patterns to the favorite ones. They are plant forms, for lack of a better phrase.

As I have grown artistically, I have become a little more deliberate about photographing what I am looking for. I am still figuring out exactly what that is, but I usually know it when I see it.

I aspire to be as intuitive as the agricultural scientist George Washington Carver. He created many new uses of peanuts, soybeans and sweet potatoes. He wanted alternative crops to cotton, which had been over planted and depleted the soil.

He famously said that he would walk in the garden and the plants would talk to him. These walks produced his new inventions.  I used to think that these ideas was crazy.

Now, I believe that he would probably walk through the garden in a meditative state, and then ideas would come him. One day, maybe I will be like that too. In the meantime, I will keep trying to find the secrets of those plants…